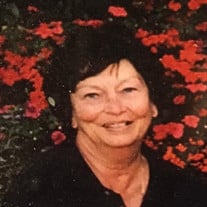 Deda Jayne Whitaker passed away peacefully in Newton, NC on August 8, 2021, surrounded by her family. She was born on April 5, 1946, in Rushville to Weldon and Maxine (Spacy) Wall. She was the beloved first Grandchild of Jesse & Hazel Wall and Clifford & Ruth Spacy. She grew up in Manilla and at the age of 8 moved to Rushville along with two of her three siblings, Margo, and Denny. Deda later become the adored big sister to another sister Lisa. Deda graduated in 1964 from Rushville High School, Rushville and later earned her cosmetology license. She was a master hairdresser in Indianapolis where she lived with her family, husband Michael Whitaker married October 2, 1964, and children Douglas (Doug), Jennifer (Jenny), and Gregory (Pooh). She returned to Rushville in 1974. Deda stayed in Rushville until 1998, when she moved to Las Cruces, NM to enjoy time with her daughter Jennifer and her family. She moved back to Rushville in 2015 and had begun to split time with her Rushville family, and North Carolina with her daughter’s family. Her first job was at the Dairy Delight, a high school hangout that fit her personality to a tee. She had many jobs, as well as a homemaker. Deda was the Executive Director of the Rush County Red Cross. She and her husband owned a farm and farmed together for many years. Deda was a master gardener and worked at Kuhn’s Landscaping in Shelbyville. She worked in banking in Rushville for Rushville National, Peoples and later in Las Cruces at Pioneer Bank. Deda Jayne had a zest for life that included, watching lifetime shows, gin & tonics, and laughing with her children, grandchildren and many nieces and nephews. A fan of Elvis Presley, she used her hairdresser connections to have 5th row seats at Elvis’s last concert at the Coliseum in Indianapolis. The parties that she and her husband gave with their friends every year was a joy to her. Vacations were spent in the Summer at Glen Eden Lake in Michigan or on the beach in Winter. She loved her family, and spending time with them was her favorite part of the day. A vibrant lady who was a member of many social and civic groups, Deda was an active member who could be counted on to supply the fun. A 50-year member of Kappa Kappa Sigma, her beloved social sorority, where she held the position of President & Treasurer of the local Rushville Chapter. She was a member of Daughters of the American Revolution and held many chairmanships. Deda was a member of the Republican Lady’s society. A member of St Paul’s United Methodist Church in Rushville. In Las Cruces, Deda attended St. Paul’s Methodist Church who shared the same name with her lifelong church in Rushville. While in Mooresville, NC, with her daughter, she was a member of the Golden Girls, Iredell Senior Citizens and Lakeview Church. Deda is survived by her son, Doug Whitaker, wife Holly, granddaughter Abbey Jo, grandsons Josh and Jerrod Wedding. Daughter Jennifer Ward, husband Rocky, grandchildren Malia, Jorie, Garrett and Bradan Ward, and granddaughter Emily Mann. She is survived by one sister; Lisa Jo Winship. Surviving nieces and nephews; Geoff and Alex Wesling, Jessica Mull Cole, Brian Mull, Ashley Wall Bowles, Joshua Wall. She was proceeded in death by her grandparents; Jesse & Hazel (Coon) Wall, Clifford & Ruth (Sherwood) Spacy Glendenning. Husband; Michael Whitaker. Parents; Weldon Wall, Maxine (Spacy) Wall Kuhn, Sister; Margo Mull, Brother; Dennis Wall, and son; Gregory Whitaker. Services will be held at 11 AM Friday, August 13, 2021 in Moster Mortuary, Rushville. Burial will be in the Rushville East Hill Cemetery. Friends are welcome to visit the family at the mortuary on Thursday evening from 4-8 PM. John Wall will preside.

Deda Jayne Whitaker passed away peacefully in Newton, NC on August 8, 2021, surrounded by her family. She was born on April 5, 1946, in Rushville to Weldon and Maxine (Spacy) Wall. She was the beloved first Grandchild of Jesse & Hazel Wall... View Obituary & Service Information

The family of Deda Jayne Whitaker created this Life Tributes page to make it easy to share your memories.

Send flowers to the Whitaker family.