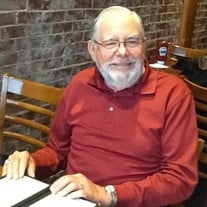 Dallas Frederick “Fred” Earnest, 81 passed away at his home on June 11, 2019. He was born on March 17, 1938 in Rush County, IN to the late Dallas H. and Maxine (Macy) Earnest. Fred was a 1956 graduate of Arlington High School. He is survived by his wife of 64 years, Janet (Binder) Earnest. Fred was a member of the Rushville Church of Christ, serving as a past deacon and youth leader. Fred retired from Ford Motor Company after 35 years. He had served on Posey Township Advisory Board and on the board of Arlington East Hill Cemetery. Fred was also a past committee chairman of Arlington Boy Scout Troop 28 and member of the UAW. He was an avid bowler and sports fan. In addition to his wife, Janet; he is survived by his daughter, Cheryl Earnest of Carthage; sons, Jay (Peggy) Earnest of Madeira Beach, FL, Jeff (Donna) Earnest of New Palestine; brothers, Bill (Carol) Earnest of Logansport, Dan (Rosalie) Earnest of Spiceland; brothers-in-law, Joe Leach of Madison, MS and Jerry Binder of Rushville; sister-in-law, Joanne Baugh of New Palestine. His 9 grandchildren, Ryan, Janann, Brad, Heather, Travis, Megan, Ashley, Ethan, and Hunter, will all treasure his memory, as will 17 very precious great-grandchildren. Fred is preceded in death by his son, Richard (Rick) Earnest; mother-in-law, Mary Rebecca Earnest; sisters, Roxie Waggoner and Nancy Leach. A Memorial Service will be held on Saturday, June 15, at 1 PM in Moster Mortuary. Friends are welcome to visit the family from 11 AM until the time of service the same day. Burial will be held in Arlington East Hill Cemetery. Memorials may be made to Arlington East Hill Cemetery.

The family of Dallas Frederick "Fred" Earnest created this Life Tributes page to make it easy to share your memories.

Dallas Frederick “Fred” Earnest, 81 passed away at his home on...

Send flowers to the Earnest family.