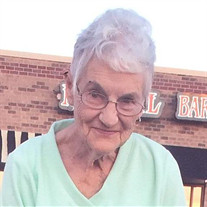 Charlotte Kinder, 86, a life-long Rush County resident, passed away October 29, 2018 in Rushville. She was born October 21, 1932 in Glenwood to George & Ethel (Miller) Richardson. Charlotte graduated in 1951 from New Salem School. She married Dale E. Kinder on May 28, 1952 and he preceded her in death on March 9, 2013. Charlotte worked many years for Pioneer Hybrid in the calibration room. She was a long time member of the Hannegan Christian Church and a member of the American Legion Ladies Auxillary. Charlotte was an avid Rushville Lion, Cincinnati Reds and IU Fan. She is survived by a son, George (Susan) Kinder of Rush County, daughters, Pam (Larry) Miller of Southport and Karen (Jason) Cox of Rushville, sisters, Elizabeth Lanning of Richmond and Marilyn (Kenny) Vogel of Rushville, grandchildren, Doug (Kheonna) Kinder, Rob (Ashley) Kinder, Sam (Brittany) Kinder, Charlie Miller, Cameron & Adam Cox, great-grandchildren, Thea, Bryan, Russell, Miles and Sadie Kinder + another on the way in Feb 19'. She was preceded in death by sisters, Ethel May and Norma Jean Carpenter and brothers, Edward, Donnie, John & Floyd Richardson. Services will be held at 1 PM Thursday, November 1, 2018 in Moster Mortuary, Rushville where friends are welcome to visit from 11 AM until time of service on Thursday. Warren Engel will preside and burial will be in the Orange Cemetery. Memorial contributions may be made to the Ashley Spurlin Fund thru RCCF.

The family of Charlotte Kinder created this Life Tributes page to make it easy to share your memories.

Send flowers to the Kinder family.