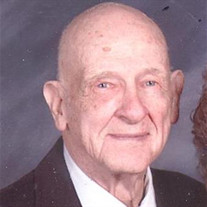 Charles D. Lanning, 94, of Rushville, passed away September 17, 2018 in Rushville. He was born July 16, 1924 in Brookville to Jesse Millard & Flavia (Biere) Lanning. Charles married Velma Watkins on September 17, 1944 and she preceded him in death on August 9, 2014. Charles spent his early life in Brookville and had been a resident of Rushville sine 1954. He worked as a Union welder, carpenter & painter. He worked several years for New Castle welding, Carter Lanning and also Union painters in Indianapolis. Charles also drove many years for Lloyd Motors. He was a long time member of the Rushville Church of the Nazarene. He enjoyed tinkering and woodworking. Charles made many wooden "quarter pounders" and enjoyed giving them as gifts. He had a quick wit and gentle nature. Charles is survived by his daughter-in-law, Penny Lanning of Rushville, a brother, Don Lanning of Raleigh, a sister, Letha Sheppler of Connersville, grandchildren, Catherine Renea' (James) Ketchum of Greensburg, Andrew Thomas Sweet of Spiceland, Rachel Michelle (Omar) Dozal of Rushville and Jonathan David Lanning of Rushville and great grandchilren, Alexander Kordell and Xavier Charles Alysworth, Ashley Mohr, Kylie Rose Sweet and Zara Dozal. He was preceded in death by his wife, Velma, a son, David, a daughter, Brenda Combs, brothers, Russell & Walter Lanning and a sister, Ruth Ann Cox. Services will be held at 1 PM Saturday, September 22, 2018 at the Rushville Church of the Nazarene, 1214 N. Main, Rushville, with Pastor's Aaron Chester, Howard Bullard & Joe Hurst presiding. Friends are welcome to visit at the church on Friday evening, September 21 from 4-8pm. Burial will be in the Maple Grove Cemetery in Brookville. Memorial contributions may be made to the Rushville Church of the Nazarene and to Celebrate Recovery. Moster Mortuary, Rushville, entrusted with arrangements.

Charles D. Lanning, 94, of Rushville, passed away September 17, 2018 in Rushville. He was born July 16, 1924 in Brookville to Jesse Millard & Flavia (Biere) Lanning. Charles married Velma Watkins on September 17, 1944 and she preceded him... View Obituary & Service Information

The family of Charles D. Lanning created this Life Tributes page to make it easy to share your memories.

Send flowers to the Lanning family.