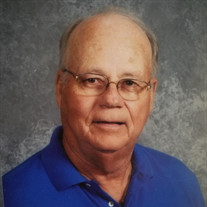 Charles Edward Gratzer, 79, a long time Rushville resident, passed away March 30, 2022 at his home in Rushville. Charles was born May 23, 1942 in Bedford, the son of George Edward Gratzer and Glen & Juanita Lee (Owens) Sykes. He was a 1960 graduate of Needmore High School and obtained his BS from Indiana University & his Master's degree in education from Ball State University. He married Elizabeth Anne Morarity on August 21, 1966. He & Liz moved to Rush County in 1968. Charles taught for 47 years, one year in Portage and 46 in Rushville. He coached many different sports during those years but loved coaching golf. He was a member of St. Paul's United Methodist Church, Indiana State Retired Teacher's Association, Indiana Coaches of Girls Sports Association, past president of the Rushville Optimist Club and had been active in the Rush County Players. Charles was an avid golfer and most recently coached golf with his daughter at Benjamin Rush Middle School. He adored his grandchildren and his English bulldog, Otis Day. In addition to his wife; Elizabeth Anne Gratzer, of Rushville, he is survived by his daughters; Michelle Linn'e (Mark) Neuman of Rushville and Kristen Marie (Mark) Hass of Rushville, his grandchildren; Ava Hass, Abigail (Spenser) Hanson, Audrey (Doug) Wicker, Matthew (Lauren) Neuman, Adam Neuman, Nicholas Neuman & Catherine Neuman, great grandchildren; Cora Hanson, Caroline Wicker and Henry Neuman and his brothers; Anthony (Kimberly) Sykes of Greenwood, Stephen (Janice) Gratzer of Bedford and Donald (Tonya) Gratzer of Florida. He was preceded in death by his parents and sisters; Donna Kay Hawkins and Betty Rose Arnold. Services will be held at 11 AM Monday, April 4, 2022 in Moster Mortuary, Rushville with Elder Mike Chastain presiding. Friends are welcome to visit the family from 2-5 PM Sunday, April 3. Burial will be in the Rushville East Hill Cemetery. Memorial contributions may be made to the Rush County Community Foundation-donor's favorite fund.

Charles Edward Gratzer, 79, a long time Rushville resident, passed away March 30, 2022 at his home in Rushville. Charles was born May 23, 1942 in Bedford, the son of George Edward Gratzer and Glen & Juanita Lee (Owens) Sykes. He was a 1960... View Obituary & Service Information

The family of Charles Edward Gratzer created this Life Tributes page to make it easy to share your memories.

Send flowers to the Gratzer family.