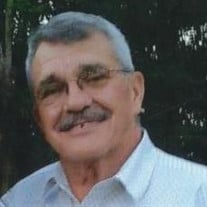 Charles Douglas “Doug” Newkirk, 76, of Rush County, passed away on February 28, 2019 in Rushville. He was born on March 25, 1942 in Rushville to the late Rolla E. and A. Lenora (McElfresh) Newkirk. Doug was a 1960 graduate of Mays High School. He married Rebecca Sednek in January of 1982 and she preceded him in death on March 1, 2014. Doug worked at Dana Corporation for 17 years until the plant closing and then he moved to Oklahoma. He lived there for 34 years and worked at Oklahoma State University as a sheet metal worker and HVAC technician, retiring in 2007. Doug was a member of Mehan Union Church in Stillwater, OK. He always had a smile on his face and loved visiting with people. He was always waiting to hear or tell that next good joke. Doug enjoyed gardening, camping, traveling, playing guitar, and his dog Lucky. Doug is survived by his sons, Jason (Lynda) Stromski of Stillwater, OK. and Dusty (Naomi) Newkirk of Cloverdale, IN., daughters, Debby Hendrix of Arlington, TX., DeLana (Joe) Laker of Rushville, IN. and Jessica (James) Gosney of Perkins, OK., son-in-law, Kenny (Kim) Nolting of Stillwater, OK. and brothers, Duane Newkirk of FL., Darrell (Kathy) Newkirk of Rushville, IN., and Dean Newkirk of Falmouth, IN. He will also be missed by several of his grandchildren and step-grandchildren, Autumn Focht, Kendall Nolting, Carly Holland, Clint and Andrew Miller, Amanda Page, Hayden Stromski and Paxton Morris, Korea, Zarah and Eden Stromski, and Brianna Newkirk and several great-grandchildren also survive. Doug was preceded in death by his parents and wife, Rebecca. Services will be held on Wednesday, March 6, 2019 at 6 PM in Moster Mortuary in Rushville, IN. with Pastor Tony Augsburger presiding. Friends are welcome to visit the family from 4-6 PM Wednesday at the mortuary. On Tuesday, March 12, 2019 services will be held at 3PM in Mehan Union Church in Stillwater, OK. Friends are welcome to visit the family from 1-3 PM Tuesday in the church. Burial will follow at Lanier Cemetery in Stillwater, OK. Memorial contributions may be made to American Heart Association in memory of Doug. Moster Mortuary, Rushville & Dighton Marler Funeral Home, Stillwater are in charge of arrangements.

The family of Charles Douglas Newkirk created this Life Tributes page to make it easy to share your memories.

Send flowers to the Newkirk family.