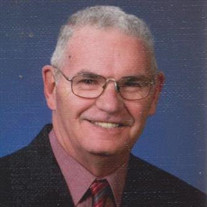 Carroll "Butch" Woods, 75, a life long Rushville resident, passed away September 13, 2019 in Greenfield. Carroll was born June 22, 1944 in Rushville to James A. & Madeline (Barnard) Woods. He was a 1963 graduate of Rushville High School. Carroll was a US Army veteran serving from 1963-1966 and then served in the US Army Reserves from 1966-1969. He married Linda Lightner on November 19, 1966 and she survives. Carroll was a truck driver during his working life, driving for Schnadig Corporation, Marathon & Quickway. He was a former member of the Rushville American Legion Post #150 and the Rushville VFW. He is survived by his children, James (Shannon) Woods and Scott Woods all of Rushville and Mary Ann (Gary) Weightman of Lewisville, a son-in-law, Jr. Wagoner of Rushville, his grandchildren, Jessica (C.W.) Messer, Andrew Woods, Ashley Woods, Shelby Woods (Tommy Burk), Wyatt, Chris & Hannah Newkirk and Lindsey Weightman and great grandsons, Teddy & Benjamin Messer + 2 on the way. He is also survived by extended family, Carl, David, James, Caron and Angelia Woods all of Rushville. Carroll was preceded in death by a daughter, Carol Wagoner, a sister, Mona Jo Woods and a brother, Paul "Hunk" Woods. Services will be held at 10 AM Wednesday, September 18, 2019 in Moster Mortuary, Rushville with Pastor John Wall presiding. Friends are welcome to visit the family from 4-8 PM Tuesday evening, September 17, at the mortuary. Burial will be in Rushville's East Hill Cemetery where the Rush County Veteran's Honor Guard will provide military rites. Memorial contributions may be made to the Parkinson's Association, American Diabetes Association or to the Hancock Memorial Hospice.

The family of Carroll "Butch" Woods created this Life Tributes page to make it easy to share your memories.

Send flowers to the Woods family.