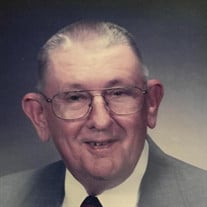 Carl Olin Marlatt, 93, a long term resident of Rushville, IN, passed away February 5, 2022. Carl was born on February 15, 1928 in Wayne County to the late Charles and Zella (Petty) Marlatt. Carl served in the US Army during the Korean War and worked for the Rush County Farm Bureau Co-op until he began to farm full time in the 1970’s. He is survived by his two children, Michael Marlatt and wife, Barbara Marlatt, and Kimberly (Marlatt) Halterman and husband, Roger Halterman, and four grandchildren, Christopher (Amber) Marlatt, Lauren Marlatt, Kristen Marlatt, and Benjamin Halterman. He is also survived by two step grandchildren, Linda (Dale) Todd and Brian (Baileigh) Halterman, four step great-grandchildren, and numerous nieces and nephews. In addition to his parents, Carl was preceded in death by his loving wife of 65 years, Mabel Marlatt, his brothers, Edgar and Forrest Marlatt, and his sisters, Elnora (Marlatt) McConnell and Clara (Marlatt) Sowers. As an active part of the Rushville community, Carl was a member of the Knights Templar, Masonic Lodge, Scottish Rite, a board member of the Rush County Soil and Water Conservation, a Richland Township Trustee, and a long time member of St. Paul’s United Methodist Church in Rushville. Carl is remembered by those closest to him as an avid amateur videographer and photographer and a true testament to cherishing the little moments. He was kind and patient and notoriously calm in the midst of chaos. So calm, legend has it, after receiving a call that his field was on fire, he stopped for a piece of pie on his way there. Though a man of few words, he always had a twinkle in his eye. His service will be held on Saturday, February 12, 2022 at 11:30 AM at St. Paul’s United Methodist Church of Rushville. Friends are welcome to visit the family from 10 AM until the time of service in the church.Burial will be in the East Hill Cemetery. A meal will follow at the church and all are invited. Memorial contributions may be made to St. Paul’s United Methodist Church of Rushville. Moster Mortuary is entrusted to the arrangements.

Carl Olin Marlatt, 93, a long term resident of Rushville, IN, passed away February 5, 2022. Carl was born on February 15, 1928 in Wayne County to the late Charles and Zella (Petty) Marlatt. Carl served in the US Army during the Korean War and... View Obituary & Service Information

The family of Carl Marlatt created this Life Tributes page to make it easy to share your memories.

Carl Olin Marlatt, 93, a long term resident of Rushville, IN,...

Send flowers to the Marlatt family.