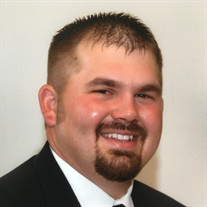 Benjamin “Ben” Wilkinson, 36, of Knightstown, went home to be with the Lord on Friday, June 29, 2018 in Rushville, IN. He was born on September 25, 1981, in New Castle, IN to Paul and Mary (Wenning) Wilkinson. Ben married Jennifer (Williams) Wilkinson on May 13, 2006, and she survives. He was a 2000 graduate of Rushville Consolidated High School and graduated from Purdue University in 2004 with a Bachelor’s Degree in Horticulture/Landscape Design. Ben was a lifetime member of Center Christian Church, Chairman of the Deacons, and the leader of the Men’s Ministry Team in the church. He worked as a dispatcher at Fraley & Schilling Inc. in Rushville, IN. He was part of Scout Troop 26 in Mays, IN and he earned the rank of Eagle, and that carried into his love for the outdoors, as he enjoyed fishing, hunting, boating, and camping. His hobbies included woodworking and shooting guns. Through all his hobbies and interests, his love for God and his family were his top priorities. Ben is also survived by his children, Libby Wilkinson (8), Allie Wilkinson (6), and Jack Wilkinson (8 months); parents Paul and Mary Wilkinson of the Mays community; grandma, Anna Wilkinson of Rushville, IN; brother, Bob (Hilary) Wilkinson of Shelbyville, IN; sister, Maria Wilkinson of Greenfield, IN. He is also survived by his father-in-law and mother-in-law, Rick and Betsy Williams of the Mays community; grandmother-in-law, Mary Lib White of Rushville, IN. Ben is preceded in death by his paternal grandfather, William (Ed) Wilkinson, of Harrisburg, IN, and maternal grandparents, Don and Theresa Wenning, of Greensburg, IN. Services will be held on Tuesday, July 3, 2018 at 11 AM at Center Christian Church, with Pastor Bill Worrell & Pastor Darryl Denney presiding. Friends are welcome to visit the family from 2 PM – 8 PM at the church on Monday, July 2, 2018. Burial will be at Center Cemetery. Memorial contributions may be made out to Center Christian Church in memory of Ben.

The family of Benjamin "Ben" Wilkinson created this Life Tributes page to make it easy to share your memories.

Benjamin “Ben” Wilkinson, 36, of Knightstown, went home to be...

Send flowers to the Wilkinson family.