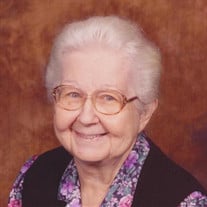 The sun was shining brightly on December 7, 2019, as Barbara Cameron, 95 of Rushville, Indiana, passed away from this earth and in to the hands of her Lord and Savior, Jesus Christ. Barbara was born on June 16, 1924 in Milroy, Indiana, to Raymond and Gladys (Ruble) Whitinger. She was a 1942 graduate of Milroy High School Barbara was married to Paul Cameron on July 18, 1946. Together they had two children, Ron (Barb) Cameron and Paula (Steve) Borders both of Rushville, Indiana. She was dearly loved by her grandchildren and great grandchildren and always up for a competitive game of Trouble, Uno, or dominoes with them. They also enjoyed receiving their personal birthday letter from her every year. She will always be affectionately remembered by them as their Grandma, Mamaw, Gram Cam, Me-Maw, and G-Mac. Her grandchildren are: Mike (Debbie) Cameron, Patrick (Michelle) Cameron, Brianne (Nick) Riedman, Jordan Borders, Hillary (Jason) Padgett, and Seth Cameron. She was also a loving great-grandmother to Brooke Cameron, Dawson Cameron, Matthew Cameron, Grant Cameron, Bryce Banks, Alyson Cameron, Layne Cameron, Kyler Cameron, Cameron Riedman, Jackson Riedman, and third baby Riedman joining us in the near future. She was preceded in death by her parents, her husband Paul, her brother James Whitinger, and sister Bernice (Whitinger) Hinchman. Barbara was a member of the First Church of God in Rushville, Indiana. She was also a member of the First Church of God Women’s Group helping with their annual peanut brittle fundraiser, bereavement meals, and volunteering to help the residents to the weekly church service at Miller’s Nursing Home. She enjoyed attending Vicki Campbell’s Dare to Believe bible study. She devoted her life to God and her family. She was a prayer warrior! She stood upon God’s word and walked the path of righteousness that God commands us to. She taught us to believe in and lean on our Heavenly Father and to praise Him in all circumstances. We rejoice in God’s gift of His son and eternal life. We grieve for ourselves, but we find comfort in knowing that she is at peace and with Jesus. We will miss her until we meet again! Services will be held at 11 AM Thursday, December 12, 2019 in Moster Mortuary, Rushville with Pastor Garry Jordan presiding. Friends are welcome to visit the family on Wednesday evening from 4-7 PM at the mortuary. Burial will be in Rushville's East Hill Cemetery. Memorial contributions may be made to the First Church of God in Rushville or to Premiere Hospice.

The sun was shining brightly on December 7, 2019, as Barbara Cameron, 95 of Rushville, Indiana, passed away from this earth and in to the hands of her Lord and Savior, Jesus Christ. Barbara was born on June 16, 1924 in Milroy, Indiana, to Raymond... View Obituary & Service Information

The family of Barbara E. Cameron created this Life Tributes page to make it easy to share your memories.

Send flowers to the Cameron family.