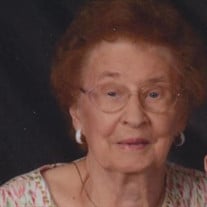 Ann Innis, 90, a long time Milroy area resident, passed away September 14, 2020 in Rushville. Ann was born January 9, 1930 in Noblesville to James Stevenson & Blanche (Kester)Stevenson Davis. She was a 1947 graduate of Noblesville High School and obtained her BA from Hanover College in 1953. Ann married Lowell Innis, Jr. on April 5, 1950. She was a long time member of Milroy Christian Church where she was in the church Guild and served as Choir director. She was a member of the Music Study Club, the Tuesday afternoon bridge club, Tri Kappa, Monday study group, Milroy Culture Club, Rushville Road Runners, Phi Mu and the Rush County Chorale. Ann taught English as a 2nd language at Milroy School, she was a teller in Milroy at the Rushville National Bank and she also worked at the ASCS office. She will be missed by her husband, Lowell Innis, Jr of Milroy, her sons, Jim (Elizabeth) Innis of Rushville and Jeffrey (Julie) Innis of Milroy, her grandchildren, Julie (Bryan) Swann, Brandon (Kristin) Innis, Steven (Yuri) Innis, Jenna (Shaun) Tieman, Sarah and Nick Innis and her great grandchildren, Jackson & Taylor Swann, Sloan, Collins, Stevie, Rylan and Harlyn Innis. Graveside services will be held at 10 AM Wednesday, September 16, 2020 in Milroy Cemetery. Ron Simbro will preside. Memorial contributions may be made to the Milroy Christian Church or to the Donor's favorite charity. Moster Mortuary, Rushville, entrusted with arrangements.

The family of Ann Innis created this Life Tributes page to make it easy to share your memories.

Send flowers to the Innis family.